These are newish ones …

… from yesterday, in fact. They're a little different from the usual ones that you've been seeing, but they hold together as a unit, and are a nice change-of-pace from those I've been posting, so I thought you might like to see them … give you a bit of a look of the Midwest in Spring, too.
It all started when I was showing my Scottish Lassie these from a couple of days ago … a few shots at random, as it were … First, there's this little shot, especially for you Europeans, who, I understand, don't have these little bandits in your milieu:

I caught this little guy robbing the trash basket. They're cute, they're very smart, and THEY HAVE HANDS! For those unable to identify him, look up "raccoon".

These are some pretty little flowers (I don't know what they are, by name) at the end of a walk through a little shopping mall behind our favourite restaurant:

And that brings us to this: I was impressed by the beautiful cirrus clouds, seeing the building and tree as framing elements …

… but my Scottish Lassie was enraptured by the false front of the building, seeing the clouds as background. Just goes ta show ya, eh? LOL Anyway, the building made her think of the false fronts of stores in cowboy movies, and I must admit that I never thought of that; it's a common-enough architectural conceit all over the country, especially in the Great Plains and the Prairie states.

So … I went back. A couple of shots of the park as Spring takes hold:

Man, these look kinda dark … I'm gonna have to calibrate my screen. These are picnicking tables, still in stacks from the Winter. They need refurbishing, and they will get it. 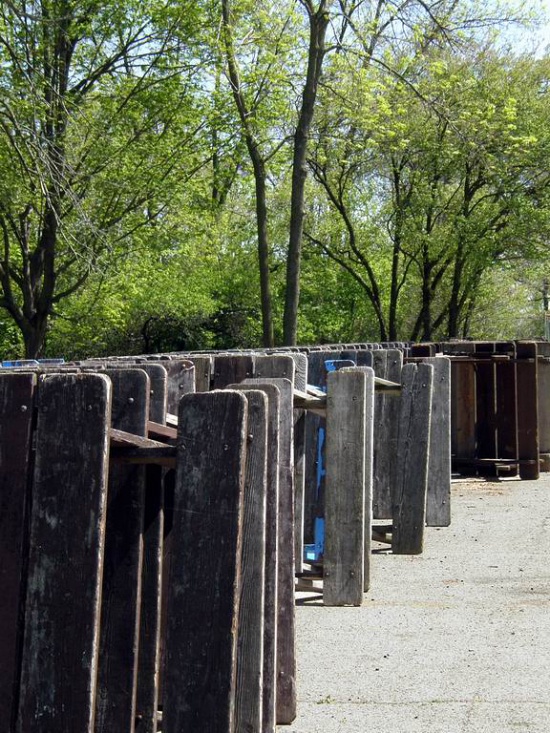 And a tree who thinks she's Isadora Duncan: 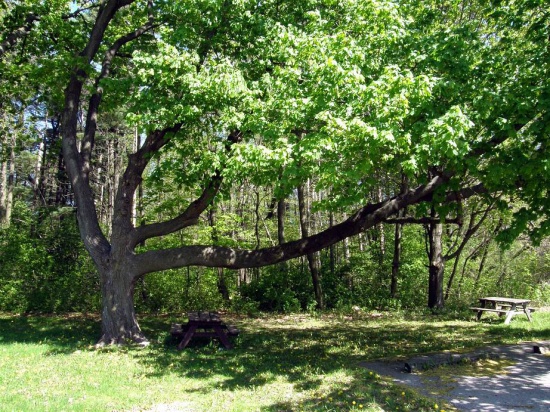 And here we are at the entrance to the little mall …

And from here on, I will eschew comment, save when there is something special about a particular shot … the entrance leads into a small square: 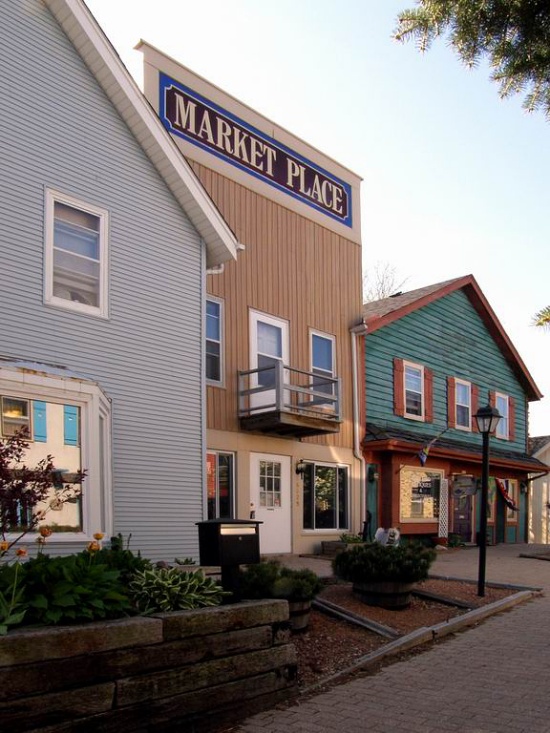 A view down the entire mall: 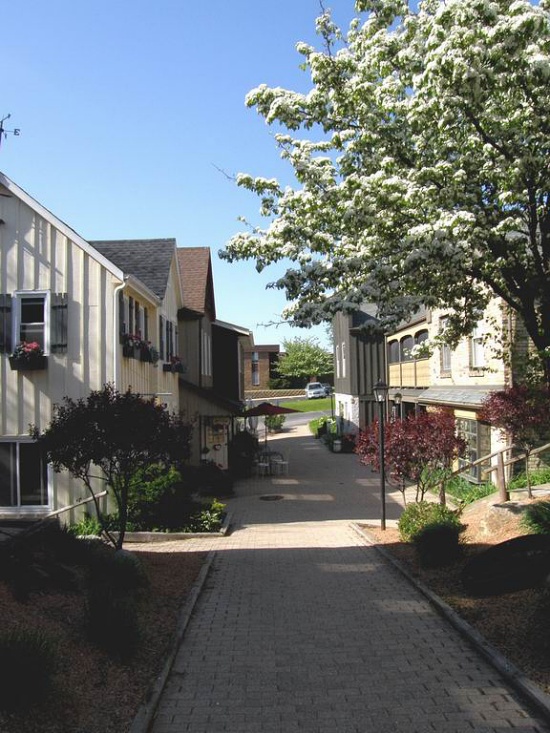 And a little byway between buildings … I especially enjoy the sublime disregard of the vertical displayed in that handrail.

Some flowers at the far end, where the blue ones were (and still are) …

A pottery shop, named "Potter's Field". This is amusing to an English speaker, but may not be amusing in other languages …

And a view into one of the windows: 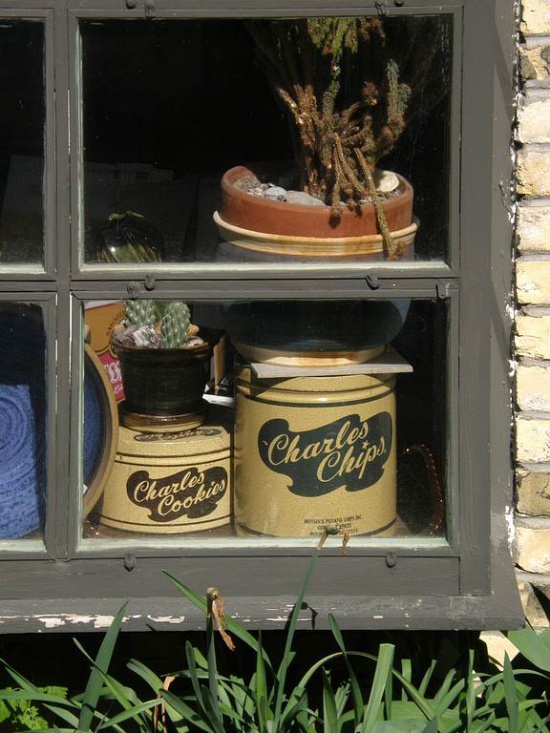 An art gallery which has "objets d' art" made from junk … the least artistic sign in the mall. Bloody awful, actually. 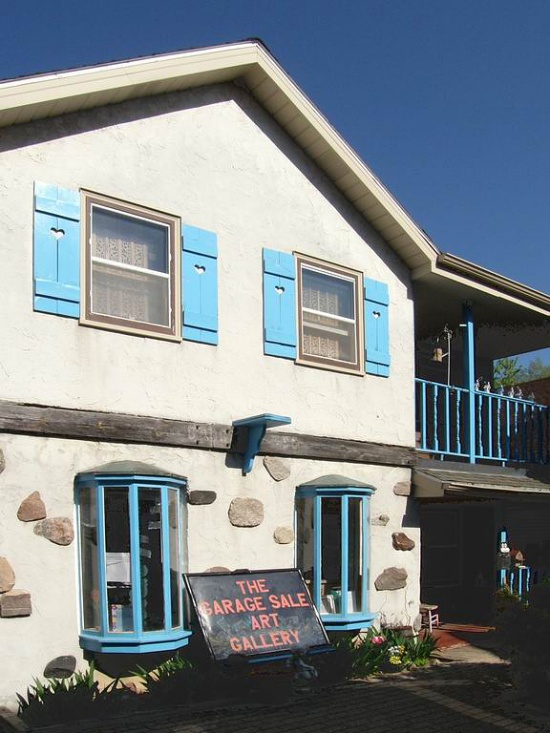 And back out into the square again … our tour is over.

But I must show this next pic; it cracked me up when I got it blown up and could see what it was. I had difficulty seeing it through my viewfinder, but I saw what I thought was a woman with a large pad of paper on an easel, painting or drawing out at the end of the causeway at the beach (where you so often see a flagpole and flag in my shots) …

LOLOLOL … that sleeveless shirt looked like a squared-off piece of paper at the distance I was at, and my mind filled in the rest!

And here is a business card of my daughter's that I found yesterday, too … alas, she no longer is in business at that address, or any other on this planet. I cannot say about other planets. I've posted it in the photos of her work, as well as here.

Cheers, all … I hope this has been enjoyable.

Posted by derwandersmann on May 20, 2009 in Uncategorized

15 responses to “These are newish ones …”

Adventures in the wilds of England by Adele Brand

Photo of the Week or Thereabouts - A compression of our days. Sometimes just a theoretical snapshot.

Sam from Asagaya
Tapping Away in the Middle of the Night